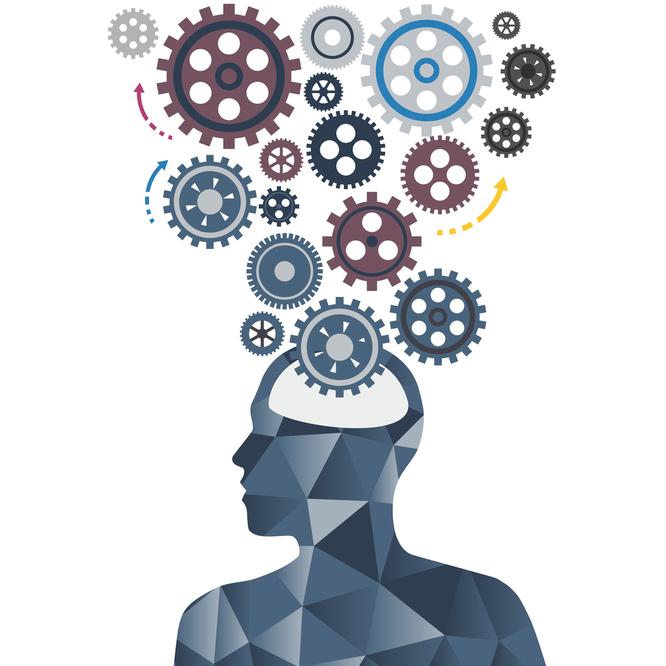 The longer you’ve had your eating disorder, the harder it is to change the way you think. This is not to say you can’t recover. It just means that the incredibly hard business of changing what you do is only the beginning. Fixing broken thinking patterns is where the real work lies. If you can’t do it, you will eventually fall back into old behaviours.

You don’t notice how broken your thinking is when you’re in the grips of the disease. I started noticing it more once I had some solid time in with the behavioural changes. Suddenly, all the “fat” thoughts, judgements, and directives were glaring. Before, they were just background chatter, a soundtrack for the actions I was taking.

Noticing what the eating disorder is saying is a win, absolutely, but noticing is only part of the process. The important step is changing the thoughts. Challenging them, countering them, and rewriting them so they’re more suitable for the non-eating disordered person you’re working on becoming. I assume the final step is not having eating-disordered thoughts at all. I wish I had a timeline for when that might happen; unfortunately rewiring neural pathways takes time.

It’s odd how you have all the time in the world for the problem but can’t bear to spend any time on the solution. I gave up decades to my eating disorder, yet I resent the time it’s taking to get better. I want it fixed now. I want recovery to be easier.

I developed my eating disorder at age eleven; I added throwing up to my repertoire at age nineteen and aside from brief respites that occurred while I was in treatment in my twenties, continued vomiting multiple times a day nearly every day until five years ago. That’s twenty-five years of purging. I didn’t even fully abstain during pregnancy, much to my regret.

Five years ago, I went into treatment for what I hope will be the final time. It was an intervention-based decision and the fact that I was at “do or die” definitely contributed to my willingness to go away for help. I’ve spent my adult life determined to stop but unable to, even when I ended up in emergency rooms. I knew death was a possible consequence but the threat didn’t feel real. But things started happening and suddenly, it loomed uncomfortably close. So, get busy living or get busy dying. *

I only threw up twice while I was in treatment. That’s two times in three and a half months, the best I’d managed since nineteen. More importantly, I was able to continue the behavioural changes upon leaving. First, it was not throwing up for a few weeks, then a month, then a couple of months. My latest stint of sober eating will reach eight months on Friday. I consider that to be a miracle.

There is fallout from having a prolonged eating disorder, of course, something health practitioners perhaps don’t emphasize enough in the early days. I might have fought harder if I knew the consequences of soft bones, organ problems, and essential toothlessness were pretty much guaranteed. I might have fought harder if they told me the eating disorder was making my depression worse. Or, I might not have. The desire to be thin wasn’t qualified; it was at all costs. Still, late is better than never. At least that’s what I tell myself.

The eating is reasonably stable and the purging is pretty much under control but I get disheartened at times because I don’t have my brain back. The sobriety that has been so hard-fought for is still primarily of the body. I’d say my brain is about forty percent recovered. That is, I think like someone without an eating disorder about forty percent of the time. The rest of the time is something else.

I still kind of believe that I need to be thin in order to be acceptable. I still struggle to live in a body that I vaguely dislike for being imperfect (though vaguely dislike is better than the extreme loathing I used to evince); I still judge the amount of flesh I carry; I still check for visible bones. I still worry about clothing sizes and the thigh gap and the diameter of my upper arms and I worry about what kind of person I am if I’m physically imperfect. I also worry about what kind of person worries about such a shallow thing. I still freak out if I get bloated. I talk myself out of the panic these thoughts contribute to now, however, and that’s new.

I also still restrict. Sometimes I think it’s okay to do that. Sometimes I pretend the eating disorder voice isn’t talking to me. Sometimes, I let it take me where it wants to go. Habit and the sixty percent, I suppose.

I wanted to lose some weight. I’ve maintained a recovery weight for a while; it’s heavier than I’m really comfortable with. I wanted to drop a few pounds. I went back and forth on it. No, I shouldn’t. Yes, I should. Other people lose ten pounds without getting sick. People recovering from eating disorders probably shouldn’t diet. My legs are too soft and large. I’m an empirically small person. I’m not comfortable being this size. I should get comfortable, not lose weight. Back and forth, round and round.

I decided finally that trying to lose about ten pounds would be okay as long as I was also improving my diet. More protein – something that is hard to re-introduce when you’ve had an eating disorder. More vegetables – I still tend to avoid sides. More fresh fruit.

It seemed like a good idea at the time. I should’ve been more suspicious of my eating disorder’s silence. I should have talked about losing weight with my therapists – avoiding discussing the choices you’re making with the experts trying to help you is a sign you should probably pay attention to.

At any rate, I went ahead, lost a little weight, cut back on my intake, started wearing baggy clothes, and watched my bones get more defined. I also started revelling a bit in the feelings of hunger that come from a reduced caloric intake.

I went back to using small bowls and I didn’t even think about it. It’s a pretty common eating disorder thing. You use small dishes, small cutlery, small portions. You start to think it’s normal. You start to think that a serving of dinner in a half-cup bowl is a good thing.

Sneaky, sneaky, sneaky. Eating disorders and other addiction-style problems are sneaky. They really don’t want you to get unhooked. I get it; where would they go if you were all better? So, they dig in. They mount covert campaigns.

The thoughts part of the eating disorder is hard to break free from. It’s the biggest challenge. It takes the most time. It shows up everywhere.

My thinking is better than it has been for most of my adult life. It’s not great thinking, it’s still not anything like the brain of someone who hasn’t had an eating disorder, but there are improvements. I still make odd bargains with food, I still eat in somewhat dysfunctional ways, I still obsess over the imperfections of my body. But I do some things right. I eat three meals. I eat snacks. I engage in moderate exercise only. I’ve avoided the temptation to go back to eliminating whole categories. I stay away from “healthy” food fads. I try to say nice things to my hips and thighs, or at least not trash-talk them. I’m working on liking myself and being comfortable in my skin.

Most importantly, I argue with the eating disorder thoughts. I counter them with logic. I remind myself that fat isn’t a feeling. I remember that most of the time, I don’t want to end up dead.

I get impatient but rewiring the brain takes as long as it takes. One day, I’ll be able to exercise for twenty minutes and just enjoy the experience. I won’t argue with myself about doing ten more minutes because my body needs serious work if I’m going to be perfect. I won’t consider making the proposed extra ten an extra twenty because thighs, and I won’t think about how forty minutes every day for a week would mean I could lose at five pounds and wouldn’t that be great?

Eventually, my brain will get there. Eventually, I won’t have to address and reformat my thoughts. Eventually, I will order the first food that appeals from the menu, without checking out the salads. Until then, you just keep doing the work. You argue with your eating disorder voice. You remind yourself ad nauseum that the eating disorder is a liar. You ignore the little voices the neuroses send that tell you it’s too hard and taking too long. You get ready for battle 7,295 because, why not?

What else are you going to do with your time but work on being better? It’s a reasonable pursuit for anyone. Besides, I know how re-engaging with my eating disorder ends.

*Paraphrased from something Red says in the movie version of The Shawshank Redemption.