sometimes having a mental illness feels like you’re surrounded by a wall. the wall serves several purposes: it keeps people out and away and keeps me safe, but it also keeps me trapped, tethered to the depression and anxiety that can make daily living so hard.

it’s a rather fluid wall. sometimes it’s short, like a little stone wall that rings a garden. it’s there and it’s an impediment, but you can see over it to the world beyond the borders that trap you. you can see that a better view and environment is within reach. with a little bit of effort and some cognitive work, it’s possible to step over the top and find your way into the garden. it’s nice there. it’s quiet, there’s sunshine and flowers, and your brain isn’t out to get you. you’re in harmony with the world around you and life has some flow. those days don’t happen all that often but i remember them and strive to recreate them in the now, in spite of my brain’s attempts to direct me in other directions. 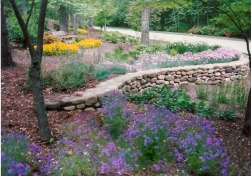 other times, the wall is tall and dark and exceptionally forbidding. it feels like a huge, oppressive structure that is dark black and stretches higher than you can see. when it’s like that, it becomes less like a barrier and more like a prison that traps me inside, stuck there with my neuroses. it’s annoying knowing that the key to escape is nearby, but being unable to find it, unable to see any chinks in the barrier, unable to corral my thoughts. i know what i want to do, i have lists of things i’d like to accomplish, yet they seem out of reach. the effort to do seems like too much; i lack the strength and the will. the wall sucks away every bit of energy, enthusiasm, and motivation, leaving me in despair, convinced that i’ll never see the outside world again, even while a small voice in the back of my head strives to remind me that this is transitory and will pass. moments feel like forever behind the black wall.

i’m not trying to accomplish anything particularly grandiose in my life but when i’m behind the black wall, even getting dressed is a win. it’s hard to explain that to people, however, when they ask what it’s like being mentally ill. how do you explain to someone who’s never experienced anything like it that your brain is out to get you; that you are in a constant state of conflict with yourself?

how do you explain the noise that isn’t noise that bounces around the inside of the skull, the unheard sound that drives negative and derogatory thoughts, that traps you in loops that are devastatingly awful? how do you explain the pressure that isn’t pressure, that exists only as a thought and yet drives you to extremes of behaviour to try and alleviate the intensity? it makes me want to pound on my head at times in order to make it all subside. how do you convince people that the substances we use, and the self-destructive behaviours we engage in are all driven by our desire to be better, even though it doesn’t look like it from the outside? how do you make someone understand that you hurt yourself partly because doing nothing becomes untenable?

how do you get someone who’s never experienced the paralyzing inertia that comes with depression to relate to what it’s like? how do you make them understand that your brain is all about telling you that you can’t. that you can’t get up, you can’t get dressed, you can’t write, you can’t do anything, and you might as well not bother because you suck at everything you attempt, and you’ll fail at even the small things too.

what can you say to the people who question your need for medication? to the friends who offer up opinions and social media soundbites about walking in the woods and eating well and getting enough rest, all the while failing to understand that even the most basic functioning is problematic at times. how do you convince them that eating well is almost impossible when bothering to eat at all feels like an unbearable challenge, and that you parted company with good sleep years ago? how do you share your truth without sounding overly dramatic when you tell people that the pills are the only things that stop you from ending up once more on a literal ledge?

i know they can’t really “get it” and yet i want that understanding desperately. i want the validation. i want the people in my life and the people i encounter to understand me. i want some damn sympathy. i want them to agree that living with a mental illness is hard and doing the best you can is sufficient. i want to believe it myself. i want to believe it on those days when the wall is high and insurmountable, and it feels like you’ll never see the garden again; on those days when the feeling of being trapped is so strong that just like a captured wild thing, you’d be willing to gnaw off a leg if it would only give you some space and some ease.