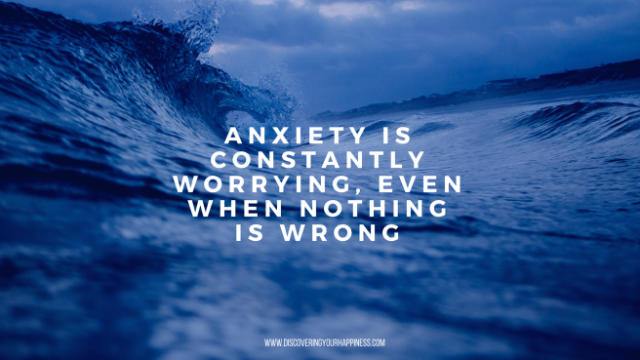 it’s nine-thirty in the morning and i’ve been up for nearly five hours; i’m not doing sleep very well of late. too much in my head, too many thoughts, and most of them unpleasant. if i’d have been given the choice, i would definitely have rejected anxiety. it is fatiguing to deal with its constancy.

my life is currently in a state of flux. i’m taking a course, my son is off to university, and my adult daughter is moving back home with her baby. challenging for the most stable of brains and mine is definitely not that. i feel overwhelmed and my default setting when that happens is to return to negative coping behaviours as my anxiety ramps up and my inside voice starts to attack.

i feel agitated and ugly and wrong and fat. eating is once again an evil my thoughts say i should be able to do without. my brain is also screaming at me to get out there and exercise so that i can avoid that fate worse than death, which my brain reminds me is letting myself get fat. because those are the only two choices – eating disorder or obesity.

this morning i read a post on an eating disorder page that i half-heartedly follow and it summed up my struggles rather perfectly though that wasn’t the writer’s intent. she wanted to know how to feel better and function well in the world without actually giving up or changing any of the multitudinous rules that an eating disorder requires. seeking recovery without recovery. i get it though. i’m often in the same boat.

i’ve lived with the rules for decades. they kept me safe. they didn’t, of course, but that’s what my eating disorder likes to tell me. abandon some of the behaviours if you have to, it says, but don’t ever forget that you are fat and that’s what makes you worthless, and a failure, and unlovable. it talks and talks, and i sit here paralyzed.

i want my eating disorder voice gone. i’m tired of every meal and snack being a struggle. i’m tired of justifying hunger. i’m tired of the sotto voce counting of calories. i feel like i’m walking on a tightrope and every step is an exercise in maintaining my balance. eat or don’t eat. eat this but not that. eat this and then skip that. exercise hard or the time is wasted – those fat thighs won’t slim themselves. feel better but remember who you are. i feel fragile perched here; one misstep and i’m back in the trenches trying to claw my way out.

the truly frustrating thing is that i put myself here. i’m the one who stepped out on the rope and i’m the only one who can get myself down. i’m paralyzed by ambivalence. i want to get better but…i want to be healthy but…

the only thing i need to do is step down but “only” is a tricky word, like “just” and “should”. “only” makes it sound like the steps are easy when in fact they are viciously hard. leaving my eating disorder behind leaves a big hole and anxiety is only too eager to fill it.

i used to wish that a fairy would appear and wave a magic wand, and poof! i would stop throwing up. well i’ve stopped now, i’ve held the line for six months but that’s the extent of the miracle. my eating disorder is still raging away on the inside, taunting me with insults, and tempting me to jump back into its arms. it’d be so easy to do.

not today though. i will read, and write, and go for a walk. i can always cave into its demands tomorrow.

4 thoughts on “choosing to stay the course for today”