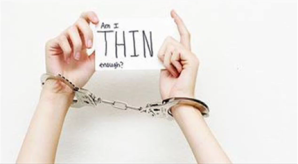 thirty-seven years ago, i came to the conclusion that all my problems – the anxiety, the unhappiness, the bullying, the sexual abuse – occurred because i was fat. i knew that if was thinner, happiness would be mine. the first of the many lies my eating disorder has told me.

i believed that thought instantly. i never questioned it, not once, not for many years. it seemed logical in a completely illogical way. a simple and external fix to all the horrible feelings i was having, all the pain i was in. the correct number on the scale would solve everything.

i spent the next ten years restricting, measuring my bites, exercising compulsively, and bingeing, and not once did those behaviours make me happy. the answer from the eating disorder was predictable; i was still doing things wrong. the solution i came up with twenty-seven years ago was to embark on full-time bulimia.

bulimia destroyed large chunks of my life, cost a fortune, left me with permanent physical damage (especially to my teeth), gutted any remnants of self-esteem, and never, not once made me happy.

it’s been two weeks since i last threw up. before that i went three months, then two, and have averaged about two and half months of “sober” eating since i graduated from my most recent hospitalization/in-patient treatment program in early 2015.  i remind myself to feel good about these accomplishments. that it’s miles and away better than throwing up forty times a day, most days, for almost three decades.

i’m still not close to being an instinctual eater. someone who eats because they’re hungry, not because they need to stick to an eating schedule. i left behind a natural relationship with food longs ago. i’d like to get it back someday. i’m currently on the thin side of restricting. my portion control isn’t good. i’m oddly resistant to measuring out what i need, a contradiction to the years i wouldn’t eat what i could not accurately count. despite that, for the first time in forever, i feel like i’m slowly moving away from active eating disorder behaviour.