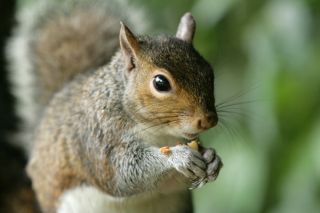 I noticed the wasp nest on the neighbour’s gutters first. It was a bit of a “eureka” moment. It’s not that I love wasp’s nests – their stings are a misery – or that I’m participating in a strange geocaching quest, rather, we’ve had an increase in sightings on the back deck and I needed to find out where the wasps were hanging their hats.

I’d checked the house and come up empty-handed. And despite my efforts and faith in essential oils, the wasps remained unbothered by my homemade tea tree, lemon, and clove oil repellant. I think one of them even liked it.

So, finding the nest was a win.

Except it means I have to talk to the neighbours.

It’s not that they’re not lovely people. It’s just thinking about talking to other people makes me anxious. I always worry about looking unacceptable and stupid. Still, not wanting my grandson to get stung is a powerful motivator. That’s a first we can do without for as long as possible.

I noticed the scratching next.

It’s not a new sound. I hear it every year. It comes from under the eaves at the back of their house. I always assumed it was birds nesting behind the flashing. It made me smile, listening to their little claws clicking away out of sight. I imagined them hopping about in that weird way birds do, somewhat sideways and with heads cocked. I imagined them in their nest, first with eggs and then with hatchlings.

I’d never seen them though.

But the scratching was going somewhere today. It was on the move. My eyes tracked the sounds to the edge of the eve, to the crack in the wood trim I’d long assumed was the entryway. At long last. I wondered what kind of bird it would be. I was hoping for sparrow or chickadee but suspected crow.

Imagine my surprise when a furry, not feathered face popped out.

Not birds. Squirrels. Suddenly, I had a problem.

Although I get anxious at the thought of talking to the neighbour, the wasp nest topic didn’t feel contentious. I didn’t worry about what might come next. Telling them that a family of squirrels had taken up residence seemed more fraught.

I like squirrels. I find them adorable. I like the rippling way they move, their big eyes, and their fluffy, bushy tails. That being said, I like them best in the forest behind the house or running about in the garden. I don’t want them as roommates – I don’t think they’d make particularly great tenants.

Unlike my imaginary birds, the squirrels had likely burrowed into the house proper. Now we’re talking about infestation and contamination. Squirrels are also not housebroken. Another strike against the occupation.

I didn’t want the squirrels’ deaths on my conscience. I have enough guilt already and I add more when I spray wasp nests in the spring. I keep telling them to build in the forest and we can be live and let live but they refuse to listen. This leaves me in the position of having to poison their homes. I feel guilty about it for days. The best is when wasps fly out in desperation and twitch to their deaths on the ground in front of me.

If there was a squirrel infestation in my attic, I’d call an exterminator who uses humane traps. Catch and release. We’d find and fix the entry points first, of course. But there would be no dead squirrels. I’m neither owl nor eagle. I’ve been lucky on the infestation front. I’ve only ever had to deal with wasp’s nests and the occasional spider.

My squirrel-awareness left me with a small-scale moral dilemma. I don’t know what kind of people my neighbours are. That is, they’re lovely people, very pleasant, but I don’t know their views on things like killing families of squirrels who have taken up residence in the attic. So, telling them was a risk from the dead squirrel perspective. Not telling them, however, felt wrong.

I solicited several opinions and since they disagreed, it helped not at all.

I was outside when the husband pulled up in the driveway, home from work. Having time run out with a decision still pending is annoying. I greeted him and we exchanged a few words before I steered his attention to the nest. He’s new to Canada and seemed puzzled as to what to do so I offered to deal with it for him. Neighbourliness trumped guilt and revulsion.

Before I had to inform him about the adorable bouncing furballs who were now living with him, he brought up the subject himself. He knew. The family is aware. There’s another entry point on the other side of the house and they caught the squirrels making themselves at home the previous week. He didn’t indicate what he’s going to do to resolve the situation and I didn’t ask. What they do is out of my control. I’m just enjoying the relief of being off the hook.

I still don’t know what my decision would have been. It’s tricky when the right thing runs smack up against uncomfortable feelings.

Do you choose feeling and emotions, or thoughts and logic as your guides in life, or do you work a combination of factors?

6 thoughts on “The squirrel next door.”