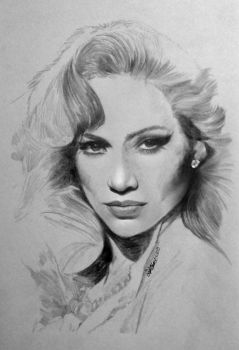 when i go out in the world, i like to channel jennifer lopez. she’s my latest, and has been the character i put on most over the last few years but i’ve channelled others before her. i walk like i think she’d walk, head up and striding bravely. i talk like i think she’d talk, hold myself with my imagined jennifer-affect, and interact with my jlo persona front and centre. she strikes me as someone who is fierce and unashamed. she seems like someone who doesn’t take any shit, and who isn’t afraid to stand up and stand out. i want that. i fake it in the hope that i can make it. going out as someone else makes facing the world easier.

it’s easier to go out when i’m pretending to be someone else. i don’t have to worry about the qualities i have if i’m making do with borrowed ones. adopting a character makes it easier to hide the bits and pieces that i assume are unacceptable. it’s more comfortable out there if i get to be not me. hiding behind a mask has seemed like a reasonable solution to the fear and self-hatred that arises when i’m expected to show up and be present.

being me has always seemed too dangerous. i feel naked, judged, and found wanting when i’m out in the world as myself.

as it turns out, it’s not the world at all. the judgement is internal. mostly, the world doesn’t care. i could show up naked and even that would only cause a minor blip. the world and the people in it have other things to do beyond obsessing about me. i’m not the centre of everyone’s attention. people are too busy being hard on themselves to have time to be hard on me.

i wonder if it’s a fatal flaw, just part of the human condition, this tendency to self-analyze and self-criticize? are we built this way? the degree to which people judge themselves varies – some are better at self-acceptance than others – but i’m reasonably certain that we all rate ourselves to some degree or other against the people we encounter as we stagger through life. there’s probably a clever, biologically-adaptive underpinning to the trait but honestly, i’m not all that grateful.

my navel-gazing and self-criticism leans towards the more extreme end of the scale, though i’m working on changing that. i suspect learning to be okay with myself as i am is the first step. this means starting to channel me. once i start accepting myself, i’ll feel better about going out as just me. once i start going out as myself and not getting criticized for it, it’ll become easier to believe i’m not being judged. believing i’m not being judged will make it easier to go out, and i’ll get more practice being me, which will reinforce the idea that i’m okay, and on it will go, spiralling up instead of down, which will be a nice change.

i’m starting small this time. baby steps are important. walk before you run and all that. it took a long time for me to believe that the grandiose and extreme goals i typically make are self-defeating. it took me a long time to believe that copying others and adopting what i perceived as their mannerisms was not a sustainable solution.