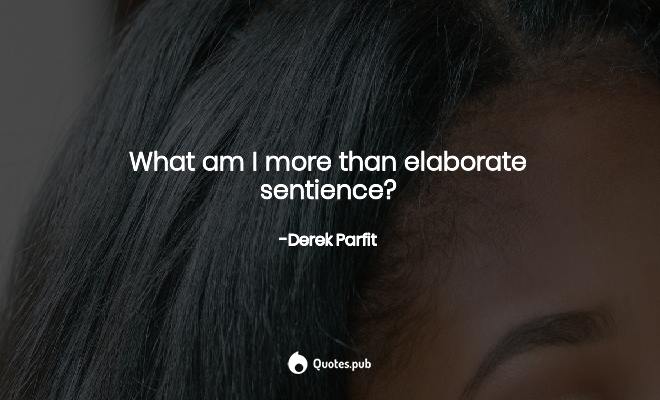 Sentience is a tricky concept. Is it the mind? Is it the soul? Who has it?

I equate sentience to the thing that makes me, me. I equate it to an understanding of life and the universe beyond myself and my immediate biological needs. I don’t know how it came to be, however, if it is a gift given by God or an inevitable occurrence when a sufficient number of neurons work together.

Is there more to sentience than the sum of the parts?

I’m not the only one who’s curious. I asked Good what sentience was and received the offer of 2,660,000 * answers written by authors with areas of expertise ranging from science to religion to philosophy. That’s a lot of thoughts and opinions to wade through.

And though I often find it useful, the dictionary wasn’t particularly helpful this time.

“Sentience is the capacity to feel, perceive, or experience subjectively. It is consciousness.”

Telling me what I know is not helpful in the least.

What I don’t understand is why we have sentience, or how electrical impulses in the brain work together to form the consciousness that is sentience, to make that mysterious thing called a mind which we believe is the thing that makes us “us”.

For some, sentience is a religious or spiritual gift. Buddhists define sentience as “being capable of suffering”. This would suggest that sentience is not restricted to humans. Or is it a matter of degree? If the ability to experience X amount of suffering means you’re sentient, does that mean the particularly obtuse and emotionally disconnected aren’t sentient?

The boundaries get blurry. I believe I’m sentient. Is my cat? Are dolphins? Is sentience a function of neurological complexity or is it more than that? Is there a line? Is everything to the left of some defining marker non-sentient and everything to the right sentient? When do we cross over from instinct to thoughts? Where does the ability for higher-level thinking end? I rescue worms from puddles because I believe they’re suffering. Is that anthropomorphizing? Is their drive to survive complex enough for sentience? Where do worms fall on the scale? How many neurons does it take to make a soul?

If something isn’t sentient, does it even have a soul? If something doesn’t have a soul, are we compelled to treat it ethically? Probably – ethics is about the source, not the recipient. What about things that are alive but unthinking? Are those things ours to do with as we will? Do we really own all the forests, rivers, and streams?

You can’t use actions as proof of sentience either. Actions can come from instincts. Withdrawing from the stimulus of fire, for instance, proves nothing about sentience, indicating only an instinctive aversion to threats to existence.

The societal rules and laws we make assume sentience. They assume a certain mental complexity. We apply these rules to people. Is that enough?  Europe doesn’t think so: it extended the definition of sentience to other species and used that to underpin animal welfare rules. Does that mean we can make demands and have expectations for creatures we decide are sentient? Should Fido get a job at some point and start contributing to society?

Are there degrees of sentience? Can you be a little bit sentient? Or is it like pregnancy – you are or aren’t, no “sort of” about it?

Does sentient mean better than? Does it denote a hierarchical ranking for life? Or is it simply a measurement with no moral component to it: a complicated Lego sculpture isn’t morally superior to a set of Lego stairs, after all.

If it’s a quality that extends beyond us, are we the best of the sentient? Are we the pinnacle of achievement? I suspect our place at the apex is due to other factors, not the least our aggressive and expansionist nature. We’re also kind of bossy.

I still hold the thought implanted by Douglas Adams – perhaps it’s dolphins who are in charge, perhaps dolphins are the best of the best.

Perhaps sentience is depth? Perhaps it’s the ability to form complex ideas that stretch beyond the bounds of immediate visceral experiences? Perhaps it’s the ability to live outside one’s boundaries, to question, envision, and imagine? Or does sentience require an awareness of time, an understanding of our finite nature, and an awareness of our inevitable mortality? Does that mean infants aren’t sentient?

Does sentience require a degree of existentialism or at least the capacity for it? Do you need sentience for art?

Is sentience the soul? Is it a gift that has nothing at all to do with mechanics? If it is a gift, did other creatures get it too? Do all dogs really go to heaven?

I have a great many questions. It’s interesting trying to figure out answers that work for me.

*Among the 2,660,000 articles was this one. The discussion herein does a good job of addressing some of the questions about sentience.

***One may be good, more isn’t better – the meaning of life part two.