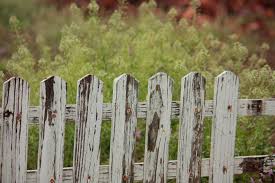 When I was young, we used to go bowling on occasional weekends. Five-pin, but in the pre-bumper days so the results were often abysmal. It’s disheartening when you’ve nothing but zeros and twos filling your row on the score sheet.

When that happened, my mother had a ritual she’d perform to help us change our luck. She’d build a fence. She’d draw it onto the paper in front of the square that held the most recent score.“There,” she’d say. “That’s done. Consider the bad luck locked up.”

It was a brilliant idea, and it often worked.

I need to build one of those fences for myself. I need to separate old thinking from the desired new.

Problems arise, however, when I try to figure out how to construct one. What do I build my metaphorical fence with?

I need a way to keep old habits at bay. Slipping into them is as easy as putting on a pair of well-worn slippers. It’s as easy as coming up with a clichéd expression.

Changing habits is hard, not just because we don’t bend as easily as we think we do, but because we’re afraid.

Much of the fear centers around my eating disorder. I’m afraid to change the way I eat.

Eating disorders are pernicious. They linger, long after you’re ready to be done with them. The thoughts and behaviours hang tough, no matter how much we tell ourselves we want them gone. A large part of that is due to fear.

When you have an eating disorder, food is the enemy. I eat minimally in order to live but my diet is regimented and restricted. One wrong bite, one wrong mouthful, and I’m failing. I know this because my brain tells me so. My brain tells me that a single portion of food outside the plan my eating disorder has developed will make me fat, and fat is worse than death. Fat for the person with an eating disorder is a loaded term; it relates to so much more than the physical body. “Fat” in my head encompasses nearly every negative personal quality you can think of. This is only true for me, of course.

When you have an eating disorder, your body is no longer your own. It’s no longer just a body. It is you and a lack of perfection symbolizes your failure as a human being. You must be perfect in every way in order to be acceptable. How can you achieve perfection if you can’t achieve dominion over one small thing, that being your body?

I am in the process of recovering from my eating disorder, but I tend to forget that it’s a process. I have been able to stop purging, mostly, and, after nearly three decades of doing so, it’s a huge accomplishment.

I can say that, but I don’t feel that. I don’t believe in the significance of the accomplishment because too much of my brain is still given over to eating disorder behaviours. I still think like someone with an eating disorder. I still obsess over food, over what I can and “cannot” eat, when I can eat, and how much I can consume before I’m“bad”. I worry over whether it’s this bite or the next that will cause me to gain weight and therefore lose the only thing of value I have to offer.

This is how an eating disorder defines your acceptability. Thin or nothing. If you’re not thin, you’re unworthy.

The logical part of my brain knows this isn’t true, but the eating disorder part remains unconvinced. My eating disorder still wants to see bones. I’ve been waiting for the magic to kick in, to heal me the rest of the way but life doesn’t work that way. There are no guaranteed rewards.

I know what I have to do, I know I have to make changes, the problem is doing it.

I’m going to meditate on the construction. Generally, I meditate about nothing. I try to stay empty, to let the thoughts flow in and out, observing but not attending to them. I’m actually pretty good at it – though my inside voice suggests that I ought not to say that since it sounds like bragging, and who the hell do I think I am?

But you can meditate on an idea,and I’m going to meditate on the fence. Where to build it, and what’s to leave on the other side. Should I abandon all my eating disorder behaviour at once,or lock up a few at a time? Should I put my haphazard laxative use behind the fence? I think perhaps yes, and yet being bloated is a huge trigger. Perhaps the “no snacking” rule could be left there. Thinking that an apple between meals will mean the difference between emaciated and huge isn’t particularly logical. Perhaps the single-item meal could be abandoned? I rarely consume side-dishes. Meals are entrees, and that’s it.

Perhaps it should be built out of challenges to established behaviours.

Perhaps it’s not behaviours that need to be fenced, but the mindset. It’s the mindset that has me bowling gutter balls, after all. But how do I lock that up when it’s so fragmented and tentacled when it seems to live in every portion of my mind, body, and soul? Address one thought cognitively and take it down only to have another one pop up.  How do I let go of the thoughts when even contemplating doing so makes me feel panicked? It’s a conundrum.

I guess, in order to build an effective fence, one must address the lot. I must gird my loins and be brave. It’s okay to be afraid but I need to fight against the inertia that fear instills and do it anyhow. Otherwise, I’ll be here forever, trapped by the fence that my eating disorder has built. So far, she’s proving to be better at construction than I am.

4 thoughts on “building a fence”