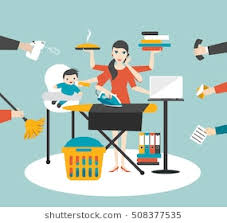 i used to be a can-do multi-tasker. i could juggle jobs like nobody’s business. i was the girl you gave extra work to if you needed it done, especially if the timeline was sooner rather than later.

i’ve never had a job where i stuck to the stated description. i’ve always gone above and beyond. i always take on more and more tasks. my jobs grew exponentially, in part due to multitasking and in part due to my cursed need for approval.

i never did one thing at a time. i read while watching television. did homework with my son, while cleaning the kitchen, while folding the laundry. committing to one task seemed like wasting time to me.

i’d clean the bathroom while doing squats while brushing my teeth. i’d dust the basement between sets on the weight machine. i’d reorganize the kitchen cupboards while catching up with friends via text while baking something.

why would you do only one thing when you could be doing many? does it matter that you aren’t giving your best to any of it?

then came the breakdown of 2015. i like saying that. it makes me sound like an historical event. i could give it an actual name – purple tuesday, or something like that, although i’m not sure the snap came on a tuesday, or even in which week of which month the shattering happened, though i’m pretty sure it was late march or early april. my memories of that time are a bit of a blur.

during and immediately after my breakdown, i didn’t have to worry about multitasking. i didn’t even worry about single-tasking. very little beyond lying in bed or sitting on the couch got done.

you discover philosophy and find that a few, like stoicism and buddhism, really resonate. unfortunately, you’re still not where you were. you’re still not back to the person who used to juggle, and you wonder about that. you try, sometimes, but it leads to backward slips and panic attacks. you start to realize that maybe you’re different than you were once upon a time. maybe this fragility is the new normal.

the coping skills you used to use, those negative things you’re trying to avoid, they’re mostly held in abeyance. this is a good thing but maybe you used them more than you realized. maybe that’s why you did so much, all the time, all at once. maybe the multitasking is connected in ways you haven’t really thought about to the negative coping skills. maybe you can’t have one without the other.

maybe that isn’t so bad.

it’s calming to focus on the singular. it’s encourages me to be mindful. it’s easier to stay with what you’re doing, be it writing, reading, or folding laundry if you’re not juggling. it’s easier to live in the moment.  i do things better when i’m focused on a single task. i know the piles of shirts in my dresser have never been folded so well – thank you marie kondo. there’s something to be said for having the time to pay attention to detail.

it carries over to non-tasks too. i’m slower, in general, with everything. i don’t have that racing sense of push that used to drive me unless i revert and try to prove i’ve still got it, whatever “it” is, and double up on the tasks. then my brain revolts, almost instantly. i don’t have the old coping skills at hand, nor do i want them, but i haven’t built up enough mental energy to deal with multiples. realizing how much energy that took is a shock.

so i’m single-task susie, for now and for the foreseeable future and i’m thinking that it’s actually a pretty good place to be.

5 thoughts on “no more multitasking”