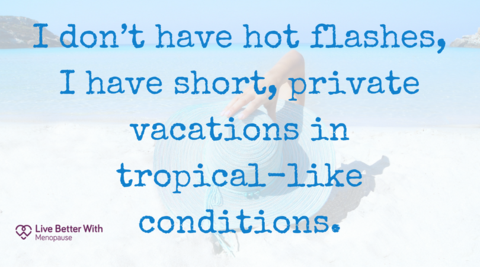 A few years back, a close friend slid all the way into menopause and started having hot flashes. Being a forty-something woman, I was aware of their existence but she was my first experience in the flesh, so to speak. My mother never experienced them. Menstruation stopped and that was pretty much it for her.

Tabitha’s reality was different. Menopause was a problem, especially the hot flashes. They happened all the time, it seemed. Her wardrobe started to consist solely of tank tops and wraps, the latter easy to remove when her surface temperature went haywire and she needed to cool down. She also kept a supply of hair ties on hand, to lift the hair off her overheating neck.

Tabitha carried a mister and a portable fan in her purse when she went out. When the flashes grew to what she considered to be an unbearable level, she’d spray herself down and run the mini-fan over her face. She was also not the kind to suffer in silence. We heard about her struggles in great detail along with everyone else in the venue. It was all very dramatic.

I confess I thought her reactions over the top. I’ve had fevers before and though they’re unpleasant, they’re bearable. And a hot flash sounded like a temporary thing. I thought perhaps she had a low threshold for discomfort. To be honest, I was a little smug.

Enter my own series of hot flashes.

Mine are not from menopause – like my mother, I sailed through that with nary a problem – but from medication. We recently increased my antidepressants in an attempt to boost me out of my hole. This is all well and good save for the fact that I now heat unpleasantly and break out into a full body sweat anywhere from five to ten times a day.

I think I dislike the full-body sweats the most, although feeling like you’re on fire is also unpleasant.

Tabitha has my most sincere apologies.

It’s almost impossible to fake your way through a hot flash. It’s hard to pretend nothing is happening. I’ve given up on “I’m fine.” For one thing, “flash” is a complete misnomer. They’re not here and gone in a finger snap of time. Sometimes they’re brief, a few second to a minute but more often than not, they run longer.

The full-body flush of heat races over you in a sincerely uncomfortable fashion. I used to check my face when it happened just to make sure I wasn’t bright red. I wasn’t but I didn’t find the drops of sweat dotting my face attractive in the least. I don’t think this is what fashion magazines are talking about when they refer to “glow”.

I now understand Tabitha’s layered look. The flashes make you want to strip down on the spot, anything to lower your perceived temperature. I was almost ready to go topless while waiting in line at the post office the other day. That, or kick everyone else out of the way. Being overly-warm also shortens my fuse.

“Perceived” is an important word. Hot flashes are weird. Although your surface and the just below feels like someone lit a smoldering fire, the body’s core temperature remains the same. I’m sure knowing that contributed to my previous lack of sympathy. Facts, however, are sometimes irrelevant. The perceptual reality is one of extreme discomfort.

On the bright side, I’ve been able to forgo my usual three blankets on the bed.

Woman who go through this via menopause have my utmost respect. They don’t have an off-switch courtesy of quitting medication. Plus, it’s not one and done; hot flashes and night sweats can last for years. I remember that when I consider bailing on the side effects. I dislike them intensely. But although I have the option of making them stop, they’re not unbearable yet and the side-effects will likely ease.

That being said, I do try to mitigate the effects. There are things you can do to help take the edge off. Unfortunately, tumblers of wine aren’t on the list.

1. An ice pack or a chilled cloth on the back of the neck does wonders as does holding the wrists under running cold water. Cool the blood, cool the body. I picked up the trick during the dog days of summer. It works for cooling hot flashes too.

3. Watch what you eat and drink. Some foods, especially spicy ones, can trigger hot flashes. Likewise, caffeine, alcohol, and carbonated drinks. Basically, all the good stuff.

5. Try to relax. Some people swear by meditation. It doesn’t seem to help me – I’ve had hot flashes while meditating – but it does reduce overall stress levels and help with health and sleep which is a good in and of itself. Acupuncture also seems to help some women manage the symptoms.

6. Stop bending over. It’s a good time to start practicing squats. Blood flowing to the head when you bend over can apparently be a trigger. I can confirm this; I’ve given up doing leg curls in more than sets of one.

7. Carry a spray bottle to mist yourself with. Carry a portable fan. My friend was ahead of her time; this is very popular internet advice. Get yourself a battery-powered spinner from the dollar store or go retro and get a hand fan. If you do the latter, consider gloves. It could be a whole new look.

8. Keep a supply of freezies or popsicles on hand. It’s a similar idea to the ice packs and cold water. Cooling your insides helps blunt the effects. It seems to shorten the duration as well.

The best thing to do is find out what your triggers are and avoid them as much as realistically possible. Unfortunately, there’s no “one and done” solution. In the case of menopausal hot flashes, women can also choose hormone replacement therapy (HRT) or try supplement, herb, or oil regimens. These options should be researched fully and discussed with your medical provider before you proceed.

4 thoughts on “The horror of hot flashes.”